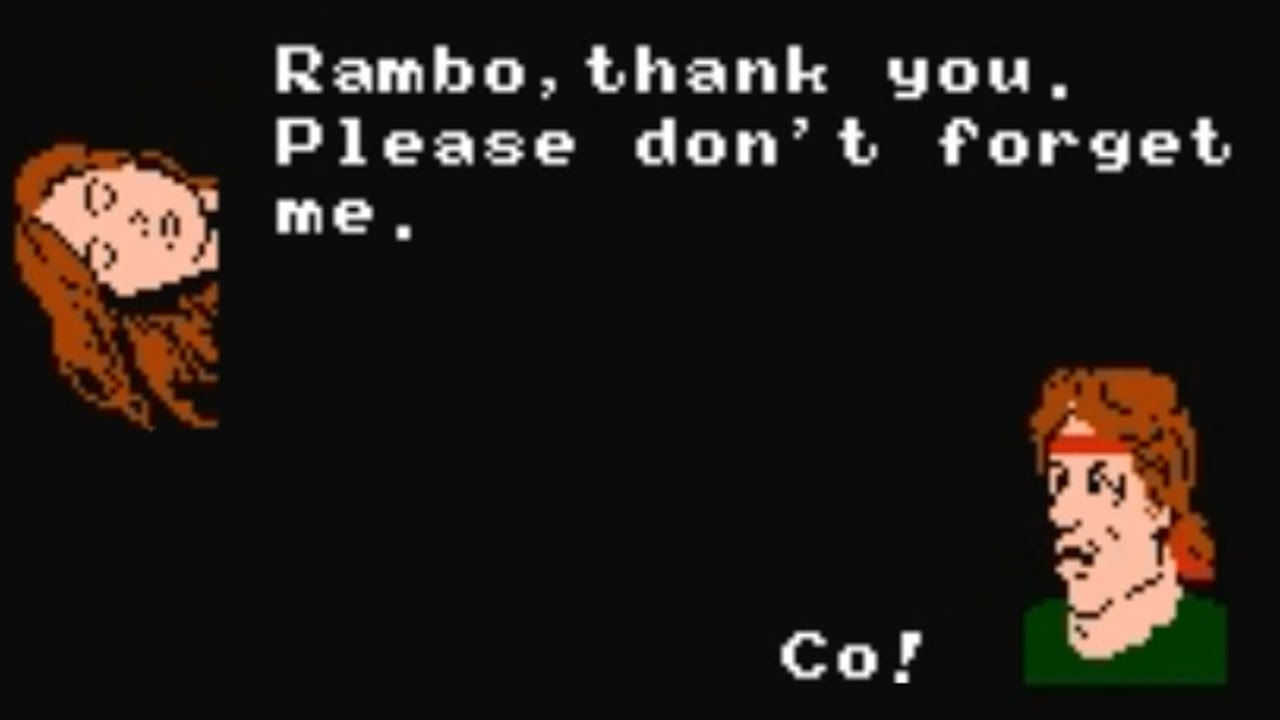 For a full review, complete with soundtrack and screenshot gallery, be sure to check out

Rambo is a game that, no matter what else people want to accuse it of, does really try to stay as faithful to the movie (First Blood Part 2) as possible. It’s an interesting Zelda 2/Castlevania II: Simon’s Quest style action-adventure game, and while nowhere near as good as those games, is a reasonable enough a game in its own right.

The soundtrack is arguably the game’s best feature, and really deserves a listen (I’ve linked it in the cards if you’re interested), and the graphics are clean, colorful, and beyond ridiculous. Rambo struts around Nam wearing what appears to be someone’s dad’s Sunday sweatpants (or he raided Karnovs closet and pulled that drawstring REALLY tight), and some of these enemy designs are hilarious: my favorites are the rabid attack flamingos and the two bosses whose heads blow up to about 500x the normal size when they get hit.

Rambo was clearly not intended for novice gamers, but it was one of those games that would toughen you up if you persevered and got through it, kinda like the original TMNT game. As a kid, if you hadn’t had any hair grow on your chest yet, finishing this game would’ve changed that.

Like many NES games, the hit-detection is hyper-specific, so you’ll oftentimes get hit by an enemy after thinking you got a hit – it feels a lot like The Battle of Olympus in that regard – and the most maddening issue with the game: until you’ve played it to death, the map layout will make no sense whatsoever. You can leave the right side of the screen, go back left, and sometimes find yourself somewhere utterly foreign. There is a system to it, but you won’t get anywhere without making maps. I mean, sure, you could memorize it, but you’d be so frustrated that you’d probably never want to finish it without some form of note taking.

Finally, the dialogue scenes are nearly worth the price of the game alone. The art is insanely bad, the phrasings are all really amusingly stilted and awkward, and no matter how dramatic the plot is that is unfolding, you always get that stupid cheery dialogue music.

I always enjoyed the game, but no doubt nostalgia weighs heavy on this one. I beat it for the first time when I was 8 or 9, and always got a kick out of going back to it in the years following.

Co Bao lives in this playthrough, but if you’d like to see the action follow the movie a bit closer, jump to the end of the video. I included the “alternate” outcome that you get if you with her at the waterfall.

Also, please note that there are three specific spots where I spliced the recording together. I did this to grind out some experience without boring everyone to tears. The transitions can easily be seen if you look at the experience points and level at the top of the screen – they will jump at these transitions. Between all three gaps, I cut out around 13 minutes of the video, because really, how exciting can entering a screen, stabbing a stalactite, exiting, re-entering, and repeating be for minutes on end?
____
No cheats were used during the recording of this video.

NintendoComplete ( punches you in the face with in-depth reviews, screenshot archives, and music from classic 8-bit NES games!

Visit for the latest updates!