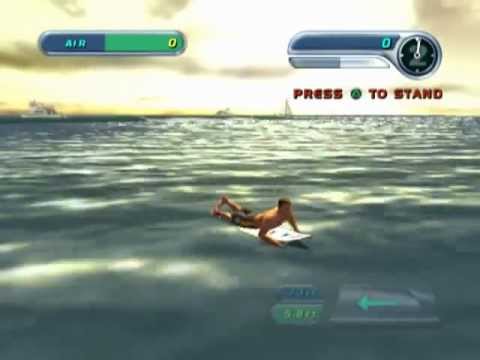 Kelly Slater nails the sport of surfing on the head, from the presentation to gameplay to the waves themselves. And somewhere along the line Activision’s extreme game designers decided to try different things, to appeal more toward the sport they were going after, a very good thing indeed. Instead of trying to replicate Activision’s uber-popular skateboarding experience directly into a surfing game, they took a different stance, approaching surfing from a surfer’s point of view. The time spent on replicating a genuine surfing experience goes a long way these days, as gamers are inundated with me-too extreme sports that don’t do enough to distinguish themselves.
Working with six-time world champion surfer Kelly Slater (who also narrates the game), Activision uses live footage to show how poetic and powerful ocean waves are, and what joys and dangers lie in that particular part of the world with Slater adding a personal story or two, such as in the intro to Curren’s Point, Japan. Slater’s disposition and his voice are remarkably humble and mellow, adding to the game’s own remarkably laid back tone. And the game features cool, acoustic music from, among others, Jeremy Kay (“Back to You”), Ben Harper (“Faded”), and they even got Perry Farrell to chill with “Nua Nua.”
Lastly, the creative interface takes place inside a traveling boat, enabling players to choose from various parts of its insides (port holes, surf racks, framed pictures, etc.) to get started. The live footage is massive. Each break is recorded, and there is a 30-minute video of Slater’ Pipeline Sessions, a video on bails, and short presentations on each of the surfers. The game also offers a substantial training session, which is well needed, since surfing requires different skills than snowboarding and skateboarding. In all, this game is delivered with a classy touch of originality and creativity.